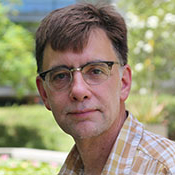 Michael Dickinson is the Esther M. and Abe M. Zarem Professor of Bioengineering and Aeronautics at the California Institute of Technology. After receiving his PhD from the University of Washington in 1989, Dr. Dickinson was a faculty member at the University of Chicago, the University of California, Berkeley, and the University of Washington. He joined the faculty at Caltech in 2002. Dr. Dickinson’s research studies the neural and biomechanical basis of behavior in the fruit fly, Drosophila, with the goal of building an integrated model of behavior that incorporates an understanding of morphology, neurobiology, muscle physiology, physics, and ecology. Although his research focuses primarily on flight control, Dr. Dickinson is more generally interested in how animals transform sensory information into a code that controls motor output and behavior. His awards and honors include being named a MacArthur Fellow in 2001 and election to the American Academy of Arts and Sciences in 2008. His 2013 TEDxCaltech talk “How a Fly Flies” has over 1.7 million views and has been translated into 26 languages.