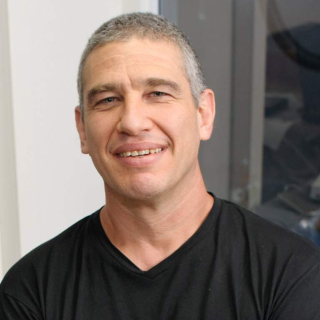 Noam Sobel is a Professor in the Department of Brain Sciences at the Weizmann Institute of Science in Rehovot, Israel. After completing his PhD in neuroscience from Stanford University and a postdoctoral fellowship at the California Institute of Technology, Dr. Sobel joined the faculty at the Helen Wills Neuroscience Institute at the University of California, Berkeley. He became head of the Department of Neurobiology at the Weizmann Institute in 2013. Dr. Sobel’s research focuses on unveiling the complex nature and brain mechanisms of the human olfactory system, which plays a key role not only in smelling, but also in our most basic social interactions, emotions, and recollections. Faulty functions of this system may indicate early signs of neurological and cognitive deteriorations, for example, in Alzheimer’s and Parkinson’s diseases. His group pioneered the development and construction of olfactometers—devices that precisely generate odors—and contributed to the development of “electronic noses”—devices that mimic the animal nose in its ability to transform molecules to percepts. Using these devices, his group discovered several key concepts in the neurobiology of olfaction, for instance, they have developed a metric that allows measuring smells and predicting the brain response that they will induce; they have discovered that human tears contain a chemical that once smelled induces a host of effects such as drop in testosterone; and they have developed technology that enables severely disabled people to communicate and steer a wheelchair by simply sniffing. Dr. Sobel and his group have been routinely published in such well respected journals as Science, Nature, PNAS and Nature Neuroscience, and their work has resulted in several patents for medical devices that are now being tested in patients.  These achievements have been recognized in several awards including the Society for Neuroscience Lindsley Prize (2000), the Chemical Senses Association Young Investigator Award (2007), the Moskowitz Jacobs Inc. Award for Research Excellence in the Psychophysics of Taste and Smell (2003), and the Juludan Research Prize from the Technion, Israel Institute of Technology (2011). In 2012, Prof. Sobel was the recipient of the Rappaport Prize for Biomedical Sciences.