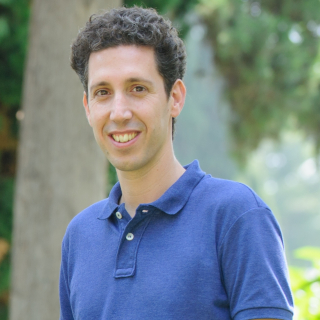 Eyal Karzbrun is interested in understanding the collective cellular behaviors, which drive embryonic brain development.  For this purpose he develops three-dimensional cell-cultures, derived from mammalian stem-cells, which self-organize into brain resembling tissues. Together with Professors Sebastian Streichan and Boris Shraiman he is developing new experimental and theoretical tools, to examine how shape, fate and function emerge during early developmental stages. His research integrates neurobiology with physics concepts, such as spontaneous symmetry breaking and mechanical instabilities, which are borrowed from soft-matter systems, such as gels and liquid crystals. Eyal received his BSc in physics  from the Hebrew University of Jerusalem, and his MSc in string theory physics from the Weizmann Institute of science. He then carried on to a PhD, on the polymer physics of DNA and the assembly of ‘artificial cells’ from biochemical building blocks. Eyal recently received the Human Frontier Science Program (HFSP) long-term postdoctoral fellowship.